Last October I wrote a widely shared blog post on Medium, concerning the launch of the Tesla Model X. In the post I argued that many of the features of the Model X did not relate to their stated goal – but instead were features of future planned vehicles. I concluded:

If I’m correct — and I think I am — the future for Model X owners won’t involve them being the only drivers of their own cars. It will involve them renting out their cars to everyone else for a price — with Tesla taking a cut — and the car driving itself. As Musk so often says, cars spend most of their productive lives sitting unused in people’s driveways. Which is crazy for such an expensive piece of hardware.

Model X will be a self-driving car with doors that open when you approach, seats that configure for the number of passengers who can then easily ingress and egress through Falcon doors, with lots of in-car stowage available, that runs on batteries in the floor charged by solar fuelled battery packs at supercharger stations (and elsewhere).

How will Uber, Hailo, Hertz, Avis, Enterprise, Budget et al compete with this? It’s not exactly clear to me.

Today, Musk announced his “Masterplan Part Deux“, a followup to his 2006 masterplan for Tesla. As predicted, he announced the ability to lease your Tesla for hire. I won’t reproduce the whole plan here (it’s worth going over to read yourself), but the key points are:

Making money from your car

Let’s focus on the last point, as that’s the one most related to my post from October. To some extent the first and second points are also related but more on that later. Musk today outlined the following in relation to using your car to make you money:

You will also be able to add your car to the Tesla shared fleet just by tapping a button on the Tesla phone app and have it generate income for you while you’re at work or on vacation, significantly offsetting and at times potentially exceeding the monthly loan or lease cost. This dramatically lowers the true cost of ownership to the point where almost anyone could own a Tesla. Since most cars are only in use by their owner for 5% to 10% of the day, the fundamental economic utility of a true self-driving car is likely to be several times that of a car which is not.

In cities where demand exceeds the supply of customer-owned cars, Tesla will operate its own fleet, ensuring you can always hail a ride from us no matter where you are.

There it is. A Tesla autonomous platform for on-demand leasing of your car via mobile app. In addition, Tesla has thrown down the gauntlet to every ride-sharing app currently in existence including Lyft, Hailo and Uber – which is currently valued at twice Tesla’a market cap (Tesla $33bn/Uber $62bn).

As indicated in the original post they are also throwing down the gauntlet to all car rental firms – as Musk is clearly indicating that Tesla plans to own, operate and lease autonomous vehicles itself.

But there’s more to be parsed here. In part of 1 of the masterplan Musk says:

In addition to consumer vehicles, there are two other types of electric vehicle needed: heavy-duty trucks and high passenger-density urban transport. Both are in the early stages of development at Tesla and should be ready for unveiling next year. We believe the Tesla Semi will deliver a substantial reduction in the cost of cargo transport, while increasing safety and making it really fun to operate.

With the advent of autonomy, it will probably make sense to shrink the size of buses and transition the role of bus driver to that of fleet manager. Traffic congestion would improve due to increased passenger areal density by eliminating the center aisle and putting seats where there are currently entryways, and matching acceleration and braking to other vehicles, thus avoiding the inertial impedance to smooth traffic flow of traditional heavy buses. It would also take people all the way to their destination. Fixed summon buttons at existing bus stops would serve those who don’t have a phone. Design accommodates wheelchairs, strollers and bikes.

Trucks is an obvious move for Tesla to make – and it has been widely speculated on at other forums. Buses too have also been speculated on, but it’s the details here that I’m interested in: “by eliminating the center aisle and putting seats where there are currently entryways”. What could this mean exactly?

Let’s return for a moment to what I wrote about the Model X 10 months ago, arguing that certain features were being tested in the Model X for particular reasons that were unrelated to the reasons explicitly outlined by Musk during the launch:

2. Electronic seats that move forward to make the lives of parents easier at the touch of a button? No. A software update will allow the seats to configure themselves for passengers arriving to get into a car where the doors open themselves (Uber – but you tell it how many people and the car gets ready for the group).

3. Ease of ingress and egress for humans in the Model X because of Falcon Doors? No. The doors don’t exist for frustrated parents — they’re doors designed for a self-driving taxi/rental mobility platform.

If an autonomous and electric “Tesla Bus” has removed the driver, entry way and the center aisle, then how will passengers ingress and egress? Falcon Wing-style doors on the side of the bus perhaps? I would say this is a distinct possibility (Elon Musk said Tesla ‘wasted’ lots of time and money on perfecting the doors, with the stated intention that it was simply to help you get groceries/baby chairs out in tight spaces).

“Design accommodates wheelchairs, strollers and bikes”. Buses that configure themselves perhaps to allow for variable uses (desks, bikes, working areas, all seats)? Seats with lots of storage under the seats, for your shopping and bags?

I see something of a contradiction between Musk saying that buttons might be present at existing bus stops that summon a bus to collect you, if he also says that buses will bring you to your doorstep. Why would hailing one require going to a bus stop? It might be to do with perceived efficiency in people congregating at the same location – but surely if buses are delivering passengers to their homes directly, then collecting them makes sense too.

In essence, electric autonomous buses could be seen as Tesla not only throwing down the gauntlet to the ride-sharing industry, but also to the entire public transport system. Bus driver jobs would cease to exist, except as Musk points out, for fleet managers. But there’s gonna be a lot less fleet managers than there are drivers today.

The same is true of autonomous trucks. What’s the most common job in most US states? Truck driver. 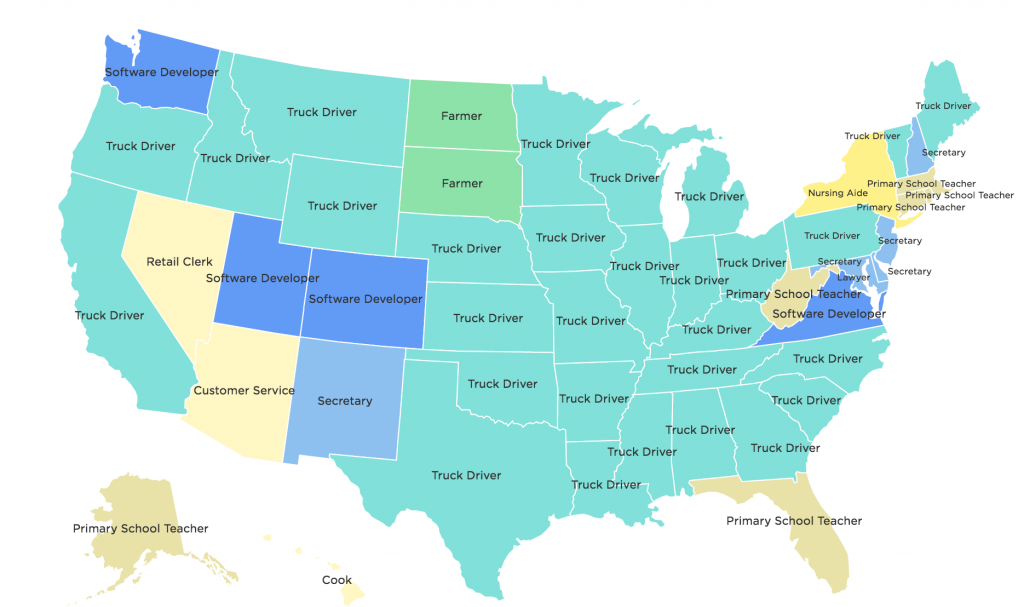 If Tesla is even mildly successful in displacing truck drivers, then it won’t be just bus drivers out of the job. (Some might argue though that productivity gains through humans not having to do menial tasks like sit in front of a wheel for billions of combined hours per year might help offset this.)

It raises more questions though. Will Tesla sell autonomous trucks to haulage and logistics companies, or will it just cut out the middle man like it plans to do with autonomous cars, and operate an entire platform of autonomous trucks globally? Will the same be true for buses?

I assume that Musk could go a few different ways. Even if he just sells buses to bus companies, those companies will still rely on charging stations, Tesla batteries, Tesla storage, Tesla/Solar City panels etc. Or if you go full on – operate bus operations yourself. The same might be true of the haulage scenario.

A third and final point is this. Tesla’s bid to buy Solar City has been widely criticised by the market – but I’m not going to get into that here. What is worth noting is somewhat obvious – all of these vehicles will have batteries and batteries need power.

It is clear that joining solar collection to the power needed by autonomous cars (that you lease to other people using the power from your roof); by autonomous trucks; by autonomous buses, would make some sense. In addition, all of these vehicles would need to self-refuel – hence the experimentation with the Tesla snake recharger.

You do wonder though – if the cost of hailing an autonomous Tesla becomes so cheap and efficient, why would anyone buy a car? Musk says that having a revenue stream from your car will:

“..dramatically lower[s] the true cost of ownership to the point where almost anyone could own a Tesla. Since most cars are only in use by their owner for 5% to 10% of the day…”

This is interesting. If all cars tomorrow were a Tesla, would we all need one? If autonomous cars – using Musk’s figures – increased use of existing stock by a factor 10, then isn’t there an argument that we need less cars than today? And if we need less cars, what would be the motivating factors to buy a new Tesla? That they could rent it out into a flooded market of other owners who rent them out?

I’d like to ask Elon Musk some of these questions myself – but he seems to be a busy man.

I am long Tesla and Solar City at the time of writing.